This is an old article, technical advice or opinions may be outdated.

We’re all guilty of a bit of Twitter whoring now and again… sometimes it’s a competition for a new Nikon DSLR, sometimes for an invitiation to the latest web app, sometimes for a couple invites to the freaking .net awards! Oh yes baby, who dares wins…

I’m not used to winning stuff, I think I won a free packet of crisps from a Walkers bag once, so I wasn’t really expecting a DM from the @netmag team…

Well there you have it, I’m going to the .net awards at the Ministry of Sound club in London, woohoo!

It was good to see services / sites that I use on a daily basis such as Typekit, Dropbox, Flickr and Smashing Mag get an award. I was equally surprised that Ravelry won the best community site… a site for knitting! Still good to see an underdog beat the power of Facebook. Mr Zeldman won three awards in one way or another, as you’d expect.

Overall a good night, great to meet up with new people and celebrate our geeky existence, it was also hilarious having Jack Whitehall presenting the awards, it was clear he didn’t have a clue, this made it all the more fun. It was interesting getting lost before the event, however it’s easy to spot lost geeks, just look out for those wondering around staring at Google Maps on their iPhone, so thanks to Maria, Matt and Chris for showing us the way.

One parting gift from me… sorry Shane :P 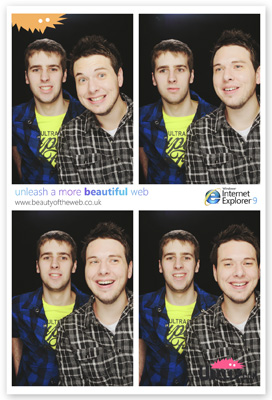